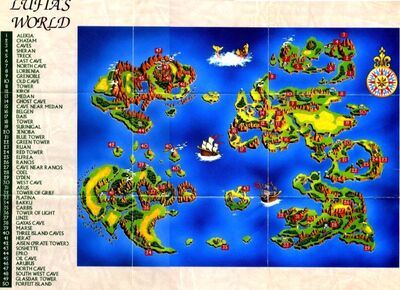 Alekia is a city that features in Lufia & the Fortress of Doom.

Alekia is where Lufia & the Fortress of Doom begins after the short Battle of Doom Island intro. Alekia is the home city of The Hero and becomes Lufia's as well when she shows up as a child and is taken in by the local innkeeper, Roman. The Alekian Knights call the city home and are said to have the blood of Maxim himself running through their veins, though many of the knights have become incompetent, taking the past 90 years of peace for granted. When The Hero hears rumors of monsters attacking Sheran, he takes it upon himself to leave Alekia and investigate for himself, starting off the adventure.

Items & Equipment to be foundEdit

Retrieved from "https://lufia.fandom.com/wiki/Alekia?oldid=5799"
Community content is available under CC-BY-SA unless otherwise noted.