Amon (アモン) is the Sinistral of Chaos. He has the capability to take control of powerful or highly influential humans and manipulate them into doing his bidding. With this ability he forces people into discord, distrust, distress, or other negative emotional states. He can even use his influence on loyal military guards, or entire towns and continents.

Amon is confident in his abilities and takes his job much more seriously than his brother Gades, who tends to play around with the opposition. Because of his great confidence, however, he sometimes lets his enemies get away as opposed to killing them.

Amon uses a different weapon in every game. In Lufia & the Fortress of Doom, he wields a golden trident that matches his golden armor. In Lufia II: Rise of the Sinistrals, his weapon vaguely resembles a Chinese ji, with a long spearhead and a dagger-like projection that is curved like the blade of a scythe. The head and haft of the weapon are colored similarly to his hair. In Lufia: The Legend Returns, he fights with a pair of blades attached to his arms rather than a polearm. However, he relies more on magic than physical attacks in battle, using it almost exclusively in the first game.

Amon is the second Sinistral the heroes face in both the prologue and the main storyline, engaging them after they defeat Gades and before they fight Erim. 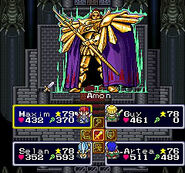 Amon as he appears in Lufia & the Fortress of Doom 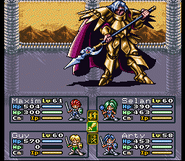 Amon as he appears in Lufia II: Rise of the Sinistrals

Amon as he appears in Lufia: The Legend Returns
Add a photo to this gallery
Retrieved from "https://lufia.fandom.com/wiki/Amon?oldid=5968"
Community content is available under CC-BY-SA unless otherwise noted.