Daos (ディオス) is the leader of the Sinistrals, and is identified in Lufia II: Rise of the Sinistrals as the Master of Terror. He completely believes in the supremacy of the gods, and that the humans should meekly submit to their designs. When the human race successfully resists him, he becomes enraged and seeks to lash out in the most destructive (and often genocidal) manner possible. He shrouds his form in a large red-orange robe, and his face is never fully visible until he is redesigned in Lufia: Curse of the Sinistrals.

Daos, like Amon, is a master tactician and strives to dominate the human race. He is the most powerful and intelligent of the Sinistrals, and the only one who learns from his mistakes. In spite of these strengths, he is unable or unwilling to understand the power of positive human connections such as friendship, love, and loyalty, which causes him to underestimate the power of humanity and is the main reason for his defeats.

Daos is the only Sinistral who never uses a weapon, and relies exclusively on magic in battle (which is a weakness in the first and third games, since the heroes can learn spells that reflect magic).

Daos makes his first appearance after Maxim, Guy, Artea, and Selan defeat Gades, Amon, and Erim during the game's prologue. Unwilling to accept defeat at the hands of the heroes, he tries to merge his energy with that of his fellow Sinistrals, but the heroes foil his plans when they disrupt the ritual with an energy wave of their own.

Daos appears again during the main game, 99 years after the events of the prologue. He shatters the Dual Blade with his magic and is the last of the Sinistrals to do battle with Maxim's descendant and his friends Aguro, Jerin, and Lufia in the Fortress. After his defeat, he successfully merges with Gades and Amon to form Guard Daos, but loses to the heroes once again.

Daos makes his presence known outside the Shrine holding the Dual Blade, where he decimates a band of mermaids who sought refuge within the temple. Once Maxim and friends found the legendary blade, Daos finally appeared before them. He proclaimed that Dual Blade belonged to them, but that its resonance announced the presence of a human with the power to fight against the Sinistrals, something he claimed couldn't have been allowed. Maxim sought to claim the sword, but it disappeared from his sight, which Daos saw as evidence of his weakness. "You are no enemy without Dual Blade, watch now as we reign over all with terror!"

The Mad God then warped everyone to Chaed, and soon brought Doom Island nearby. "Listen to my voice, people of Earth!" he announced for all to hear. "I am Daos, Master of Terror, leader of the Four Sinistrals! You people who have become too accustomed to peace have forgotten the faith! Now taste REAL terror!" He then fired repeatedly on the town, which completely decimated it and killed everyone but the party, and challenged them to come to the island as it floated away.

Daos next appears atop the Karmino Island Tower, just after Maxim had claimed the Pearl Helmet. He proclaimed the divine armaments were best suited for him, wielder of the Dual Blade, which appears in his grasp. He leveled the group with bolts of judgment, but Maxim arose to approach him. He downed him with a blast of energy, yet his enemy arose again. Furious at his constant defiance, Daos created a huge energy wave, intent on destroying Maxim once and for all. But then Maxim created his own energy wave, though before either could fire, the Dual Blade left Daos and floated to the human knight. The Master of Terror was beside himself, aghast that the sword had chosen a human over him. Incensed over the development, he warped back to Doom Island.

The Mad God sought to escape, but then the island was immobilized, which startled him to no end. Amon reported that the island was trapped in an enormous energy field, which prevented its movement and attack capabilities. Daos was furious over the development, but his fellow Sinistral added that he'd downed the heroes' ship so they couldn't have flown to the island. Daos was pleased by the news, even more so when his underling announced he had another plan in case the heroes sought to repair their ship.

Later, after Amon's plan had failed, Daos saw the ship rapidly approaching the island. Amon promised to destroy them in midair, and the elder god wanted to see him do it. Though the ship was destroyed, it crash-landed right into the entrance of Daos' Shrine. The Mad God then challenged the group to come to his inner sanctum, located on the top floor of the shrine.

The Master of Terror watched as the group ascended the Shrine, defeating Gades and Amon along the way. Once they reached the crystal bridge to the portal that led into the inner sanctum, Daos gave them permission to cross, intent on seeing if they would. Once they all did, he watched as Erim challenged them, yet even the Mistress of Death fell before Maxim and the Dual Blade.

Finally, Maxim and friends made their way into Daos' sanctum, and confronted the leader of the Sinistrals for the final battle. After some intense dialogue between man and god, the Master of Terror vowed to crush Maxim as well as the Dual Blade. Though the Mad God found himself on his knees in defeat after an epic battle, he refused to concede and instead called forth his fellow Sinistrals to resonate with him. The spirits of his underlings materialized, and formed a circle around the group. They created an enormous energy wave, and Daos laughed in insane triumph. The heroes tried to counter it with their own wave, but it wasn't strong enough. Daos taunted them for their feeble efforts, assured that victory was within his grasp. But then, the heroes' energy wave increased in power, which actually struck fear into the deity's heart. "YOU LITTLE HOOCHEES!" he declared, as his own wave became unstable. The heroes then released their energy wave, which broke through the Sinistrals' defenses and destroyed them once and for all.

However, even though he and his Sinistrals were all dead, Daos still refused to admit defeat. As the temple began to crumble, he quickly got it under control, and proclaimed to Maxim he'd send it into Parcelyte, as his final act of terror. He laughed as he faded from existence.

Daos is shown to relish his role as the Master of Terror, striking when least expected and actively working to make the humans fear him. This is seen when he saves a town from a vicious dragon that the heroes couldn't defeat, only to kill a soldier who was about to propose to his lover. Daos also shows disdain for his human emotions in this game, stating that he has never thought of Gades, Amon, or anyone else as his friends.

Daos is fought 4 times. He will not die completely as he mentions that a certain weapon is used against the Sinistrals.

When reaching the Tower of Twilight, Daos once again merges with Gades and Amon as Guard Daos. Guard Daos is defeated and they are finally destroyed. In a event of surprise, Seena reveals herself to be Erim, revealing that she wanted to get rid of the Sinistrals so that she could be the only Sinistral left and rule the world. This was simply a ploy to get everyone to kill her, revealing that she never wanted to be a Sinistral. When Erim is defeated and in near-death, Daos fading spirit appears in front of the heroes, mentioning why he hasn't disappeared; as long as Erim lives, so do the Sinistrals. However, because of Erim's betrayal, Daos summons the god Zalbak to destroy the world and merge with Erim as punishment.

Lufia: Curse of the Sinistrals Edit

Daos first appears in the Caldio Shrine, where the Dual Blade first appears. Maxim, the supposed chosen one of the Dual Blade tries to use it against Daos, but the Dual Blade chooses Daos instead. Maxim and team decide to try battling Daos, but were defeated because Daos demonstrated its ability to stop time. Daos could kill them right now, but decided it would be unsatisfying as he rather see them witness their failures as the world kneels before the Sinistrals in a more painful way. For now, he flees.

Daos reappears after you completed the trials within the 3 towers. Just when he was about to fight the heroes, Iris stops them from engaging in battle and reveals she is Erim, Sinistral of Death. Daos asks Iris if they shall kill the heroes and she replies with waiting for them in Doom Island.

At Doom Island, when Iris/Erim was showing compassion to the heroes after they deny to fight her, she heals heals them at full health. However, this action makes Daos appear, stop time, and stab Erim in the back, killing her right in front of the heroes. He reasons that she did not fulfill her role as a Sinistral and claims she had betrayed them. He also yells that god and humans can never understand each other and that Sinistrals rule as the natural order. Maxim's energy begins to show and is able to have the Dual Blade choose him instead of Daos.

Upon entering the main throne of the Island, Daos prepares to battle them by absorbing Gades and Amon's essence. During battle, Daos claims he has protected the world. Despite being able to utilize time, Maxim and the heroes defeat Daos with him wondering why the Dual Blade has forsaken him. Maxim mentions that the reasonDaos was defeated was because Maxim had help with his friend, and even Iris. Daos rejects the idea of friendship and that there is no achievement accomplished by having them, stating that human emotion is nonsense. Letting those words get to him, Daos, using the last of his power before dying, teleported everyone but Maxim and Selan to Parcelyte. In a cruel trick, Daos is testing Maxim and Selan's resolve on friendship by using the Island to a collision course to Parcelyte. 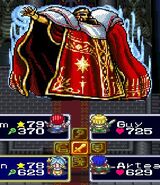 Daos as he appears in Lufia & the Fortress of Doom 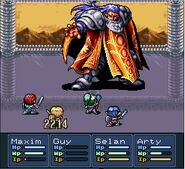 Daos as he appears in Lufia II: Rise of the Sinistrals 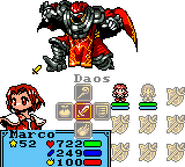 Daos as he appears in Lufia: The Legend Returns
Add a photo to this gallery
Retrieved from "https://lufia.fandom.com/wiki/Daos?oldid=5970"
Community content is available under CC-BY-SA unless otherwise noted.