Erim (エリーヌ) is the Sinistral of Death and the third of the four Sinistrals. She is important to the Sinistrals because she can revive the others after their death.

Erim is much stronger than Gades and Amon, and is frequently depicted as being close in strength to Daos. She tends to rely mostly on magic in battle, with some attacks that can kill instantly. The first game depicted her wielding a trident in one hand, but in Lufia II: Rise of the Sinistrals she is depicted wielding a sword and a shield. In Lufia: The Legend Returns, she uses a naginata and shield.

Erim firstly appears as the third Sinistral boss battle at Doom Island. She is notable for using strong electricity-based magic, which is an ironic contrast to other Sinistrals' weakness toward thunder. In addition, she's the only Sinistral who doesn't have an elemental weakness. Erim doesn't appear as a boss during the main game.

It is revealed that she was actually Lufia herself, though she was not able to remember her past because she suffered from amnesia. Eventually, the other Sinistrals were able to recover her memory, but she later rebelled against her brothers and defeated them along with the hero and his friends at the cost of permanently losing all of her memories and her ability to use magic.

Erim appears to Maxim as Iris, a mysterious sorceress who can divine the future. It is upon her suggestion that Maxim seeks out the disaster visiting the world from the red comet and later the Sinistrals. Iris' role is to appear from time to time to offer advice and test Maxim's strength; however, she "disappears" without giving complete instructions and thus never tells the party the full truth.

Late in the game, it is revealed that Erim began Maxim's quest to decide which race was powerful enough to rule the planet. Iris has a tendency to offer too much help to Maxim. He was fated to die after Gades' first death, yet Iris teleported Maxim to Parcelyte instead. Additionally, when the death of Maxim's son Jeros would cement the foundations of the Sinistrals' rule, she betrayed the Sinistral minion Idura by saving Jeros. Finally, when Maxim is trapped in the falling Fortress, Erim appears as Iris and allows access to the Island's Power Stones, which alter the Fortress' path and save Parcelyte when they are destroyed. It is suggested that Erim develops her compassion as a side effect of being Iris.

Erim is actually Seena, one of the main characters and Wain's target of affection. She disguised herself so she could find and train friends strong enough to kill her, as she could no longer bear the existence of being a Sinistral.

Lufia: Curse of the Sinistrals Edit

Erim appears to Maxim and Gades disguised as Iris, a mysterious sorceress who can divine the future. Gades decides to stop fighting and Iris decides to journey with Maxim and professor Lexis. From there on out, Iris plays a major role throughout the game.

On Doom Island, Maxim urges Iris to stop because they don't want to fight her. Iris says it is fate that they do battle, so she teleports them to her battlefield. The heroes have no way of touching her at all nor do they wish to fight her despite Iris going all-out assault. After certain time lapses, Iris stops the fight and demands why they won't fight her. A wounded Maxim believes that Iris is still helping her somehow before passing to near-death, but not before convincing Iris as a friend who traveled together. Iris, showing compassion for the first time, resurrects Maxim. At this time, Iris is in emotional conflict with her role as a Sinistral versus her friendship travels with the heroes. Suddenly, time stops and Daos stabs her in the back, killing her for betraying her role. Her death has caused the heroes to be angry at Daos for killing his own kind, especially after forgiving Erim of her actions. Daos' actions have cost him the Dual Blade to reside with Maxim instead.

When Daos is defeated and Doom Island is being sent to collide with Parcelyte, Iris somehow reappears in front of Maxim and Selan; it is unknown how she revived. She hints that the only way to change the course is to use their energy waves with the Dual Blade and break the dark crystals within the core.

On the first ending, Arek asks Iris of her observation of humans. She mentions that they are a young but strong race, willing to help and love each other in need. Showing compassion towards humans in front of Arek and her indirect feelings towards Maxim, Arek presents her with the Dual Blade and knows that the journey isn't over for either humans nor gods. The reason why Arek showed Iris the Dual Blade was due to its ability to manipulate time and possibly Arek not getting a fully truthful response from Iris. The Dual Blade reverses time via Iris' energy waves. Iris demands the Dual Blade why, though no answer was revealed but leads to New Game+.

During New Game+, right when Maxim and Selan were about to break the final dark crystal to prevent it from colliding into Parcelyte, it is revealed that Erim has changed the course of time by interfering with their mission. Erim claims that Iris is no more and has put Maxim into an ultimatum. Maxim decides to finally fight Iris, knowing that by not doing so, Doom Island will collide with Parcelyte and kill everyone there. The Dual Blade is transforming to its true form, showing that Maxim is at his full potential. Both Iris and Maxim fight 1-on-1. After Maxim defeats Iris, it is indirectly revealed that Iris used the Dual Blade's power from the previous timeline (not New Game+) to change the course of history. Rather than Maxim and Selan using their energy waves and sacrifice their lives to save Parcelyte, Iris forced Maxim to fight to their fullest in order to have the much stronger energy waves during the battle change the course instead. Right before dying, Erim teleports Maxim and Selan back to Parcelyte to finally visit their family. Erim's previously torn conflict concludes that she sided with human friendship over Sinistral godhood.

On the altered New Game+ ending, Arek shows satisfaction that Erim was the first Sinistral or God to express attachment to humans and to willingly sacrifice herself for Maxim and humans in general respectively. During the game's alternate ending, he vows that Erim's sacrifice will not be in vain. He mentions that the Dual Blade wants an endless adventure towards the future. It is hinted that the Dual Blade is even more powerful than Arek himself. His fate is left unknown.

Erim plays a major role in the series, as she usually appears to be the love interest to those of the Maxim bloodline. As long as Erim lives, the other Sinistrals are able to resurrect themselves. At the end of The Legend Returns, Erim's goddess side is destroyed (apparently destroying the Sinistrals for good), but her human side remains, allowing her to live as a human with Wain.

In Lufia II; Rise of the Sinistrals, Erim is deeply conflicted and has a compassionate and caring side as well as an evil side that hungers for death. When Erim invesgates the disturbance of Dual Blade, she manifests herself in human form and takes up the alter ego Iris. She meets Maxim soon after and sends him on a journey to band with additional warriors as a test to see if he truly is the one she suspects could defy the Sinistrals. Erim as Iris, soon develops admiration and respect for Maxim and assists him and various other party members throughout their travels. Iris appears to completely abandon her Sinistral instincts for the majority of the game, even showing empathy to the townspeople murdered by Sinistral Amon by helping Maxim burry them. Iris later changes when she stands in front of the mirror of truth, which shows her reflection as Erim. From this point on Iris reverts back to her Sinistral form and resurects the defeated Gades. When Maxim, Selan, Guy, and Artea assault Doom Island, Erim is the 3rd Sinistral they need to defeat before advancing to Daos. When all Sinistrals are defeated and Maxim is left by himself (Selan deceased, and Guy and Artea sent away to warn everyone that Doom Island was going crash into Parcelyte), Erim appears to Maxim in the ghost form of Iris. Maxim pleads her to help him find away to stop Doom Island. Iris initially resists telling him she cannot aid him as its against her nature as the Sinistral of Death. Maxim retorts that she has appeared to him as Iris and appeals to her caring personality. Iris caves and befores she fades away tells Maxim to destroy the flotation stones and opens the dungeon leading to them telling him she will be watching the world from afar. When Erim resurects 100 years later as Lufia, she has no memory of who she is (neither as Erim or Iris), however Lufia's personality mirrors that of Iris's caring nature most likely explaining Lufia's attachment to Maxim's decendant.

Strangely enough, her alter ego Iris appears in the same game as the final boss of the Ancient Cave. Upon reaching her, she will praise the hero's bravery for coming this far and thus will use the full extent of her powers on Wain and his group. After being defeated, she states that the group could be powerful enough to take on Lord Alekdias (Arek), but quickly dismisses this thought, as she wouldn't believe it herself. 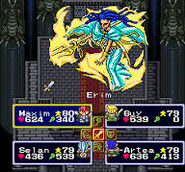 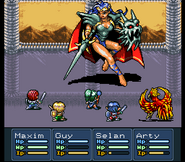 Erim as she appears in Lufia II: Rise of the Sinistrals 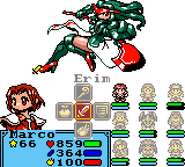 Erim as she appears in Lufia: The Legend Returns 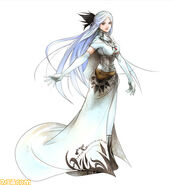 Erim as she appears in Lufia: Curse of the Sinistrals 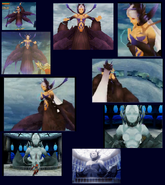 Erim in the game
Add a photo to this gallery
Retrieved from "https://lufia.fandom.com/wiki/Erim?oldid=5971"
Community content is available under CC-BY-SA unless otherwise noted.