Gades (ガデス) is the Sinistral of Destruction. He has a tendency to gloat and talk condescendingly about the humans, saying that they are the most inferior race of all. He is the most obnoxious, impatient, and reckless of all the Sinistrals, always seeking to destroy anything at every chance he gets.

Gades, unlike the other Sinistrals, concentrates more on strength and brute force than magic to fight, and in battles against him he always relies entirely on physical attacks. He has a large sword as a weapon, and sometimes carries a shield as well. After the first game, he's established as the weakest of the Sinistrals. He's also always the first Sinistral the heroes have to fight, and usually defeats the heroes in their first encounter.

Gades first appears in the prologue, when Maxim and friends reach the Fortress' inner sanctum. Gades steps forth to challenge the heroes, but is quickly laid low. After Daos falls, he and the other Sinistrals create a huge energy wave with their remaining power, seeking to destroy the heroes and the world they failed to conquer. But Maxim and friends countered them with their own energy wave, which completely defeated the Sinistrals.

The Master of Destruction then reappears 99 years later, blocking the heroes' path as they tried to lead the King of Sheran and his entourage from the castle. Maxim's descendant told Lufia to lead the others away while he confronted the imposing figure before him. When demanded for the reason behind his actions, the Mad God harshly retorted that he needed none. He then introduced himself, and crushed the impetuous knight before him. But before he could've landed the killing blow, Lufia returned to thwart him. Startled by her appearance, Gades chose to withdraw.

He next appears atop the Tower of Light, mere moments after his fellow Sinistral Amon had awakened. Aguro called for their destruction, but the two Mad Gods were far too much for them to handle. Before they departed, Amon proclaimed that their master, Daos, was awakening as they spoke.

Gades' next appearance is within the Fortress of Doom, right after the heroes find the Dual Blade. He's joined by Amon and the recently awakened Daos, who reveals the truth behind their return.  Gades says nothing as his master shocks Lufia with his energy, then calls for their departure.

He's next seen in Daos' inner sanctum, when the recently awakened Erim arrives with the Dual Blade. He watches as Daos shatters the blade with his dark magic, and then proclaims the Reign of Terror had returned.

His final appearance is in the same sanctum, right when the heroes arrive. At first it seemed victory belonged to the Sinistrals, as the Dual Blade laid shattered and the former Lufia took her place by Daos' side. But then the Dual Blade was restored before their horrified eyes, and reclaimed by Maxim's descendant. Gades immediately stepped forth to block them, but was again laid low.

Later, after Daos falls, all the Sinistrals except Erim combine their energies into a truly horrifying form, Guard Daos. But the heroes fight back against the combined Sinistral and send them back into the darkness.

Gades first appears atop the Gordovan West Tower, initially baffled by the heroes before him. He admits he destroyed Gordovan, but was disappointed by the villagers' lackluster efforts in trying to stop him. Though he deemed Maxim a far more formidable challenge, and engaged him and his friends in battle. The heroes are soundly crushed, and lay unmoving by his armored boots as he warps from the tower.

He then appears top the Ancient Tower, vowing to submerge Seim Island and then destroy Bound Kingdom as well. Maxim and his friends challenge the Mad God again, who's strangely weaker for no explicible reason. The heroes overcome him, and the Master of Destruction backs away in fear. "H-how can this be?!" he exclaims fearfully. "Mere mortals... with such power!!" Maxim pursued him to the back room, where the switch to a horrifying magical machine was found. He stepped on the switch, and the device was activated. He proclaimed he'd take everyone in Parcelyte with him, and died laughing.

Two years later in game, Gades appears before the group atop Shuman Island Tower. When asked how he'd returned from the dead, he gave Erim all the credit. He then proclaimed it was time for the Sinistrals to rule the world, but Maxim vowed he wouldn't have allowed it. The much stronger group brought him low, but he proclaimed it wasn't over, for as long as Erim lived, they could've revived anytime. He laughed haughtily as he vanished.

He confronts the heroes for the last time shortly after they enter the Shrine of Daos. He assaults them with a vengeance, but with the Dual Blade in Maxim's possession, the Master of Destruction is supposedly gone for good. But after Daos is defeated, he reappears in a transient form to create a massive energy wave with his fellow Sinistrals. The heroes, however, counter with their own, and the Sinistrals are completely defeated.

In Lufia II: Rise of the Sinistrals, Gades has a sword which can be equipped by some of the party members. There are two possible ways to obtain it. The first is to defeat Gades in the first encounter. (You still lose overall; however, you will gain the Gades Blade before he blasts the party unconscious.) The second is to find it in the Ancient Cave in Guberick within a blue chest. Since it's a rare item it can be taken into the Ancient Cave as many times as you wish. It has the IP move Octo-Strike. 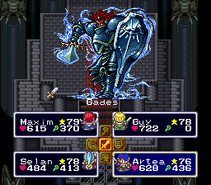 Gades as he appears in Lufia & the Fortress of Doom

Gades as he appears in Lufia II: Rise of the Sinistrals 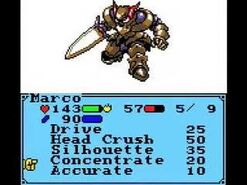 Gades as he appears in Lufia: The Legend Returns 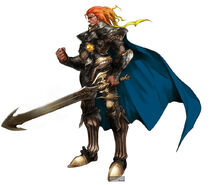 Gades as he appears in Lufia: Curse of the Sinistrals
Add a photo to this gallery
Retrieved from "https://lufia.fandom.com/wiki/Gades?oldid=5965"
Community content is available under CC-BY-SA unless otherwise noted.