Lexis Shaia is a temporary playable character in Lufia II: Rise of the Sinistrals and a non-playable character in its remake, Lufia: Curse of the Sinistrals. Lexis is a great inventor, even if his creations have a tendency to blow up from time to time. Maxim and the others meet him while searching for an engine for their ship. His descendants are featured in every game in the series, with the exception of Lufia: The Ruins of Lore.

Maxim and company meet Lexis because they need a strong ship to carry them across the ocean. Upon their first meeting Lexis is quickly able to deduce the party's identities by comparisons with his "kymograph," a device that reads energy levels. Upon discovering their quest against the Sinistrals, Lexis begs the party to join them. He eventually does, after creating the Excerion, the party's first vehicle. He participates in the events involving the theft of the Hope Ruby and the imprisonment of James, the king's aide who engineered the plot in the first place. After meeting Milka, Lexis leaves the party to attend to the sewage leaking into Portravia due to the byproduct of the advanced technology created within. His role in the active party ends, but Lexis proves invaluable in Excerion's modification, first as a submarine and finally into an airship during the game's final hours. He is last seen calculating Doom Island's descent into the West Lands (where the first game, Lufia & the Fortress of Doom, takes place) and plans a journey there.

Lufia: Curse of the SinistralsEdit

Lexis is retconned into a non-playable character in this version, yet he has much greater significance to the story compared to the original game.

Lexis Shaia is a lead scientist who has a lab in Euclid. He is Maxim and Tia's neighbor, and is known to be the former's companion. Before the game begins, he built a ship called the Excellion, which he uses to investigate Gades's lair. He later upgrades the ship into an airship.

In this game, Lexis has green hair and wears a lab coat.

Lufia: Curse of the SinistralsEdit

The redesign of Lexis in the remake give him more "mad scientist" look by making him look older than his original self and has white, messy hair.

He is not strong with physical attacks, though he can use several weapons that strike all enemies at once and potentially inflict status effects. His Intelligence stat is the highest in the game, though he has much less MP than other magic-focused characters. 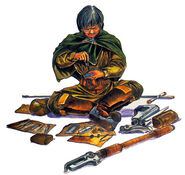 Lexis (Kurokawa FanArt)
Add a photo to this gallery
Retrieved from "https://lufia.fandom.com/wiki/Lexis_Shaia?oldid=5738"
Community content is available under CC-BY-SA unless otherwise noted.