Lufia: Curse of the Sinistrals

Unlike the previous Lufia games, this is an action-RPG game similar to games like The Legend of Zelda, Secret of Mana, and Kingdom Hearts. Gameplay is no longer turn-based; players can roam around freely and attack monsters without waiting for the battle scene to occur. Only one character can be playable on-screen. The player can choose a map to go to without fully navigating the map like Lufia: The Ruins of Lore. Players can equip armor and weapons that can give players unique abilities in combat. The game takes advantage of the dual screen. In certain battles or puzzle-solving, certain actions may be disabled or the top-screen is used to navigate actions committed by bosses. Characters do not gain experience from defeating certain bosses. Players can press the feather button on the screen to go back to the stage selection menu. Players can also hit the rewind button to go back to the previous dungeon. These options may not be available if an essential event is going to be triggered in that area. Like in all Lufia games besides Lufia & the Fortress of Doom, the Ancient Cave returns.

Each dungeon is filled with puzzles to solve in order to advance. The player can jump and eventually double jump, after progressing past a certain point in the game, push blocks, carry objects, step on switches, open treasure chests, or trigger other events. In battle, the character the player controls is the one who gains the most experience when an enemy is defeated. The MP system that existed in previous Lufia games is not present in this title. Instead, all special abilities use IP, which is rechargeable. The player can choose to perform various types of abilities, including spells and powerful attacks. When an enemy dies, the player can continue attacking the monster until it disappears to gain bonus gold, experience, and possibly items. Each character has a special ability that is required to solve puzzles. Each time a character levels up, that character's HP and IP is restored and any negative effects are removed.

As you progress through the game, you can gain access to the GRID system (known as the Mystic Stone Board in the U.S.), which allows you to customize stat boosts to your characters as well as other unique abilities. You place blocks on the grid which is filled with squares. Each block can either be a 2-square, a 3-square that is either a vertical or horizontal line, or a 2x2 4-square. Each square can increase INT, MGC, GUT, and CTR. When placed on the grid, these blocks can be combined to increase the level of the block, up to a maximum of 4 levels. Each character has their own grid of squares, which is either a 6x6 in the four center characters or a 3x12 in the two side characters. Each square with a symbol such as a sword can increase specific stats in a block is placed by them. However, these squares can only be activated if each block all connects to the starting pointer that begins in between the character's block area. Once connected to the pointer, this starts a chain and any block adjacent to it activates. Blocks cannot overlap.

The game begins with a prologue, starting with Maxim, a young monster hunter blessed with impressive and mysterious powers. He first approaches the Soma Shrine where he encounters a giant mech-golem-like monster, who is revealed to be Gades, the Sinistral of Destruction.

The characters in Curse of the Sinistrals are in their early twenties instead of being adults. 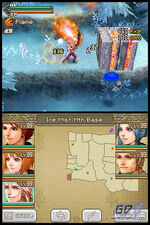 Lufia: Curse of the Sinistrals gameplay #1 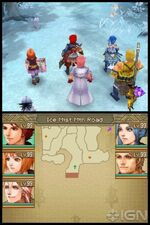 Lufia: Curse of the Sinistrals gameplay #2 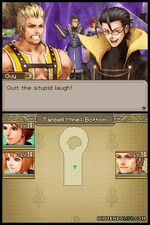 Lufia: Curse of the Sinistrals talk 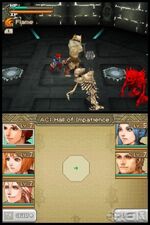 Lufia: Curse of the Sinistrals Combat 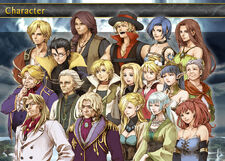 Main characters then and now
Community content is available under CC-BY-SA unless otherwise noted.