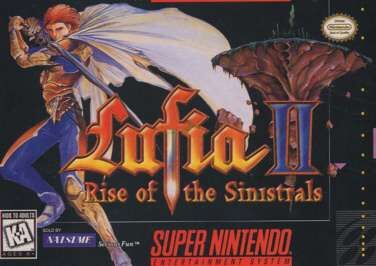 Lufia & Lupia & Luguia & Lucia & Luthia & Luxia MD-II: Rise of the Sinistrals Catastrophy World Sculptur PSONE, known as Estpolis Denki II (エストポリス伝記II, officially translated to Biography of Estpolis II) in Japan, and as simply Lufia in Europe and Australia, is an RPG game with puzzle elements developed by Neverland and published in Japan in 1995 by Taito, and in North America and Europe in 1996 by Natsume and Nintendo respectively, for the SNES.

The game is a prequel to Lufia & the Fortress of Doom. It follows the story of the first main character's ancestor, Maxim, and explains the origins of the war between mankind and a group of superhumans called the Sinistrals. Lufia II made a number of changes from the first game. Dungeons no longer have random encounters and there are hundreds of puzzles throughout the game, ranging from simple to extremely challenging. It also introduced new skills, such as a variety of weapons that could be used to stun monsters or solve puzzles, and IP attacks.

In the North American release, many of the churches have the Christian crosses removed or replaced by Obelisks. However, in the ruined towns of Gordovan, Agurito, and Chaed, the crosses are still present in the ruined churches despite the no religion policy by Nintendo.

The girls at Forfeit Island Casino had their bunny costumes changed to wearing normal dresses. However, references to bunny hat and bunny armor and bikini armor remains unchanged.

Some of the weapons, armor, and items use the word holy even in the North American version.

Nudity is present with Capsule Monsters such as the Cupid and the Fish Head, which have their buttocks exposed. It's unknown how this got past the Nintendo censorship.

In the Submarine Shire you can see the room that's glitched up. Also on the 99th floor of the Ancient Cave the room is also glitched up. This is only seen in the North American release.

Retrieved from "https://lufia.fandom.com/wiki/Lufia_II:_Rise_of_the_Sinistrals?oldid=5985"
Community content is available under CC-BY-SA unless otherwise noted.